Wrangler: Saddle Up With Western Trends

The American cowboy is a romantic and heroic figure who has fed not only America’s but also much of the Western world’s imagination since the late 19th century. His role and spirit have been immortalized in all types of art. So, what do cowboys wear actually? Have you ever wondered who invented the cowboy hat and why or what’s the difference between regular jeans and cowboy cut jeans? 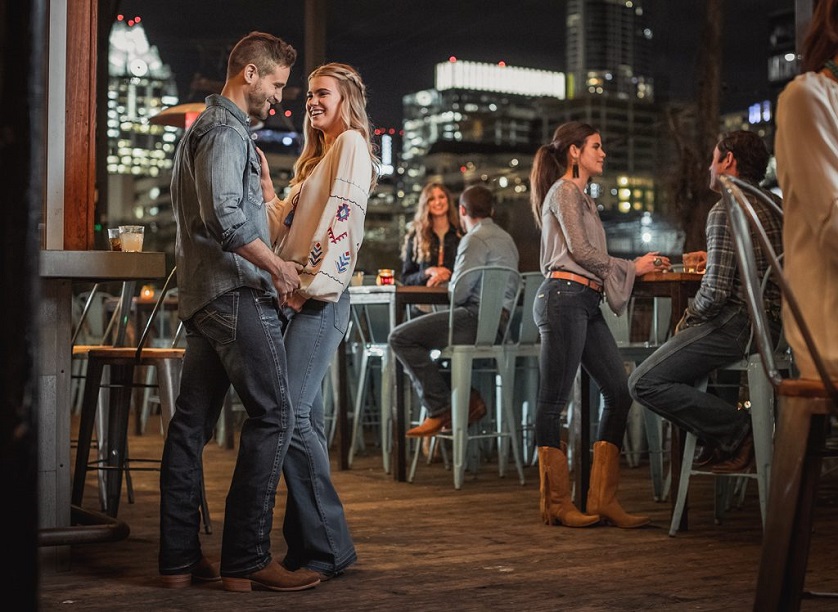 The cowboy dressed for protection from the elements and the dangers of his trade without keeping up with the extreme fashion changes typical for the time. However, certain pieces of his costume were fundamental – an authentic cowboy dress and a cowboy hat were essential garments, just as you would choose uniform shirts for your business meeting today. The cowboy hat remains the most symbolic item of western dress and has hardly changed in the 150 years since John B. Stetson invented it in 1865.

The actual dress of the cowboy was functional and best suited for the job he was paid to do. For an easier and comfortable ride, the cowboy cut jeans features high-back pockets, a wide space between front belt loops to fit a western belt and trophy buckle and extra room in the seat and thighs. Since their introduction 80 years ago, the jeans by Wrangler clothing became the number one of western’s wear. This is partly due to Wrangler’s 45-year association with the Professional Rodeo Cowboys Association (PRCA) as its exclusive apparel sponsor and the recent surge in popularity of country music stars who wear the Wrangler jeans.

Why Is Western Clothing So Popular?

Clothing is a form of expression. Undoubtedly, wearing western clothing can help fans symbolise to themselves and to others their individualistic, independent, tough, and stoic nature, just like cowboys. According to a survey done by Wrangler Western in 1995, the western wear division of an innovative and pioneer brand, nearly 50% of American women and 60% of American men surveyed that they “want to be a cowboy for at least a day” while 20% of the men surveyed want to “live like a cowboy for a year.”

Aside from the selection of functional, traditional and authentic western clothing worn in ranching and farming environments, both professional rodeo cowboys and media representatives covering the events are required to wear western dress. The number of people choosing to wear western apparel is increasing. Western wear retailers need to identify the needs of their target consumers and understand their buying patterns.

The “Urban Cowboy” in the late 70ties in a way “betrayed” class for flash. When the fad suddenly died, western wear retailers and manufacturers were left with stock that crossover customers no longer wanted. They had to find ways to lure back their traditional customers whose trust they had broken. Brands that don’t compromise are seldom found. By sticking to brands like Wrangler clothing, you’ll stick to tradition and unbending form and function.

“Wrangler’s big strength is its Western authenticity. Wrangler jeans are standard equipment for the rodeo cowboy, just like the rope, saddle, and boots. It’s the brand of the working cowboy. People want to emulate that” – Fisher (1992)

Designed by celebrity tailor Rodeo Ben in 1947, Wrangler authentic western jeans were introduced to the American consumer. Professional rodeo cowboys Jim Shoulders, Bill Linderman and Freckles Brown took the 13MWZ for a drive (or should we say ride) test and repetitively chose Wrangler clothing for their durability, quality and authenticity. In 1948, Jim Shoulders, World Champion Cowboy got an official endorsement by Wrangler. He won a total of 16 world championships.

In 1974, Wrangler jeans and shirts become the first, and still one and only western wear brand to be officially endorsed by the Pro Rodeo Cowboy Association. The original Fit Jean (a.k.a. the 13MWZ) by Wrangler is still available today and is the Official ProRodeo Competition jean. Wrangler Cowboy Cut jeans are still made of 100% durable cotton, feature deep pockets and smooth seams. Over the years, other styles of western jeans and colours have been added to the collection but the material and quality have stayed the same. You can now get Cowboy Cut jeans with a slight stretch to fabric or a Slim Fit model for those who want a snugger fit.

Today, Wrangler is still the standard the most prominent choice for authentic men’s western wear. Accessorised with belts, large buckles and metal conchos, Wrangler clothing is the perfect choice for authentic horsemen and ranchers who want simple, dependable clothing they can put to the test. The Wrangler is a must-have style of western wear for its unmatched comfort and versatility.

Some believe it’s all about the hat. And perhaps it is. Although cowboy garments varied by region, all cowboys wore hats. Interestingly, differences in hat crease, crown height and brim size provided specific information to the wearer’s background and geographic base. The Stetson hat, popularized by the Union Calvary, replaced the bowler hat by the 1870s and is still worn today.

Strings were added to the design to help prevent the hat from blowing off while riding at quick speeds. The long strings made from leather or horsehair are passed through holes on each side and wrap around the crown of the hat. By securing it under the chin or around the back of the head, the hat is held in place. A felt cowboy hat protected its wearers from the sun, wind and rain. Along with the saddle and boots, it was and is one of the cowboy’s proudest and most intimate possessions.

When doing most of your activities while riding a horse, accessible pockets are a game-changer. Pants pockets can be hard to reach when riding, making vests an important addition for the cowboy. The most common materials used were durable canvas, wool and leather. In addition to the riding vest, a kevlar vest is a requirement in both the amateur and elite levels of bull riding as a protection from the horn of the bull. They were introduced as mandatory safety policy after the in-arena death of Lane Frost in 1989.

Nowadays, Wrangler offers anything from a Wrangler Sherpa lined vest to Rugged Wear men’s fleece vest. Their top-quality materials not only offer coziness, warmth and maximum arm movement while doing tasks but are also machine washable. Their classic designs with modern twists are perfect for both workdays and weekends. The flattering fit makes it an indispensable part of your autumn and winter apparel, adding warmth but never weighing you down. Including 2 zip-up front pockets make it easy to store small essentials or keeping your hands warm while the double-layer collar provides extra protection. When it comes to layering through cool-weather seasons, it doesn’t get any better than Wrangler men’s vests.

Like peas and carrots, cowboy cut jeans are not complete without the right boot. Boots can be ropers, lacers and cowboy boots. A roper has a rounded toe, a low walking heel, and an 11 inch top. A lacer is similar to the roper regarding the round toe and low heel. However, it laces up the front and is decorated with a kiltie.

Inspired by the Spaniards who brought it to the Americas in the 1600s, a cowboy boot can have a variety of toe styles from rounded to pointed and is set apart by its high underslung heel and taller, decoratively stitched top. Cowboy boots are usually more expensive due to higher production costs.